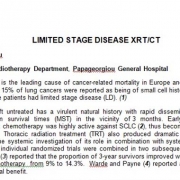 Lung cancer is the leading cause of cancer-related mortality in Europe and North America.  Traditionally, 15% of lung cancers were reported as being of small cell histology (SCLC) and 30% of those patients had limited stage disease (LD). (1)

LD SCLC left untreated has a virulent natural history with rapid dissemination resulting in short median survival times (MST) in the vicinity of 3 months. Early on, it became apparent that chemotherapy was highly active against SCLC (2), thus becoming the treatment cornerstone.  Thoracic radiation treatment (TRT) also produced dramatic local responses, leading to the systemic investigation of its role in combination with systemic therapy. The results from individual randomized trials were combined in two subsequent metaanalyses.  Pignon et al (3) reported that the proportion of 3-year survivors improved with the addition of TRT to chemotherapy  from 9% to 14.3%.  Warde and Payne (4) reported a similar absolute 2-year survival benefit.

Although these earlier studies firmly established the role of bimodality therapy, overall outcomes remained dismal with only a tiny minority of LD SCLC patients becoming long-term survivors.  It thus became obvious that optimizing modality integration was essential for further progress.  Relevant questions raised and for the most part resolved in that era included the best suited chemotherapeutic agents for bimodality therapy plus TRT timing, and fractionation.

Concurrent administration of chemotherapy with TRT proved in general to be superior to sequential treatments, i.e. chemotherapy first followed by TRT upon completion.  Although heterogeneity in study design and treatment regimes led to interpretation issues and heated debates, available metaanalyses for the most part support the notion that the best outcomes are obtained when TRT is given concurrently with platinum-based chemotherapy, starting early and getting completed quickly (relative risk 0.62 with shorter radiation regimes) (5,6,7,8).   For each week’s prolongation in TRT, there is an approximate 2% detriment in 5-year survival.(6)

Cyclophosphamide- and anthracycline-based regimens had uncertain efficacy and/or severe toxicities when combined with TRT.  For these reasons, cisplatin plus etoposide became the preferred chemotherapy doublet for further bimodality studies as it could be administered in full doses with TRT without undue toxicities.

Fractionation changes were next investigated in an attempt to improve the TRT therapeutic index.  Commonly manipulated parameters in developing a fractionation schedule are the fraction size, total dose, and time required to deliver that dose. The biologically effective dose (BED) can be used to compare the efficacy of various dose-fractionation regimens in providing tumor control. The first portion of the formula accounts for the efficacy provided by a particular fractionation program and the second part accounts for the decrease in efficacy related to the overall time radiotherapy is delivered compared with the potential doubling time of the tumor cells.

where n = the total number of fractions delivered; d = the dose per fraction (Gy); /ß = 10 for acute effects and tumor control and 3 for chronic effects; = 0.3 Gy; t = total days in which radiotherapy is delivered; and Tpot = potential doubling time (5.6 days).

In an Intergroup study(10), 381 eligible LD SCLC patients were treated with four cycles of cisplatin and etoposide, given concurrently to TRT. The random treatment variable was the fractionation schedule as the total dose was similar in both arms (4.5 Gy). In the standard arm, TRT was given once-daily (1.8 Gy) over five weeks.  In the experimental arm, the TRT schedule was twice-daily (1.5 Gy) over three weeks. The twice-daily arm resulted in fewer local failures (36% vs 52%), slightly improved 2-year event-free and overall survivals and superior 5-year survival (26% vs 16%) at the cost of more grade 3 esophagitis (27% vs 11%). The results of this study indicate that the 4.5Gy once-daily schedule is clearly inadequate but do not necessarily establish this particular accelerated fractionation regime as the gold standard. A relevant question of practical importance is whether similar results can be obtained with the commonly used in NSCLC higher doses of TRT in the vicinity of 6 Cy, delivered in standard fractionation schedules to avoid the logistical difficulties and increased toxicity of accelerated fractionation. It is of note that in another randomized study conducted by NCCTG,(11) accelerated TRT failed to show any survival or tumor control benefit and did not result in increased toxicity; study design was different however, with TRT given late and in a split mode.

There are many unanswered questions at this time regarding TRT optimization in LD SCLC. Can “standard” total doses given once-daily substitute for lower twice-daily total doses?  Is it feasible and worth escalating TRT total doses? What is the optimal volume to irradiate? Is there any role for integrating the multitude of new monoclonal antibodies and small molecules into the chemoradiation treatments and how can that be saccomplished?  Fact is the rapid drop in SCLC incidence has made LD SCLC an orphan disease with distinct lack of enthusiasm for launching such studies from both the pharmaceutical industry and the investigators’ points of view. Therefore, it is unlikely that these issues will be resolved in the foreseeable future.