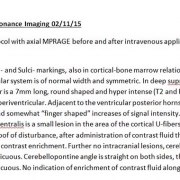 Mode: Standard protocol with axial MPRAGE before and after intravenous application of 8ml Dotarem.

Findings: Discrete Gyri- and Sulci- markings, also in cortical-bone marrow relation of the cerebral hemispheres. Ventricular system is of normal width and symmetric. In deep supratentorium cerebelli-medulla layer is a 7mm long, round shaped and hyper intense (T2 and Flair) lesion on the left side, additionally periventricular. Adjacent to the ventricular posterior horns are some progressed, smaller and somewhat “finger shaped” increases of signal intensity. Left and higher parietal in Gyrus postcentralis is a small lesion in the area of the cortical U-fibers. In the diffusion imaging there is no proof of disturbance, after administration of contrast fluid there is no indication of a focal pathological contrast enrichment. Further no intracranial lesions, cerebellum and brainstem are inconspicuous. Cerebellopontine angle is straight on both sides, the pituitary glands-sella region is inconspicuous. No indication of enrichment of contrast fluid along the Nervus opticus.

Result: Image of a weak inflammation, however without indication of a current inflammatory activity.